On January 2, 1818, the Legislative Council and House of Representatives of Illinois Territory passed an act that separated what is now Washington and Clinton County from St. Clair County. By the same act of the legislature that founded the original County of Washington, three commissioners were appointed. They met at the house of James Bankson of Shoal Creek on March 2, 1818 and pronounced that “the permanent seat of justice of said county be established on the site of the Old Town of Covington.”

The town of Covington was officially considered for the location of the Capitol of the new State of Illinois in 1818. Mr. Bankson of Washington County, and a delegate to the State Constitutional Convention, introduced a resolution calling for Covington to be designated as the official seat of government. The town was then the county seat of Washington County. It was described as being near the center of Illinois’ population, located on the beautiful Kaskaskia River, and located so that all overland roads in the whole area must “inevitably” pass through this town.

The area around Covington was described as rich, beautiful, and healthy. However, on August 20, 1818 the members of the Constitutional Convention voted to reject Covington’s bid for the seat of government and Vandalia was later selected. 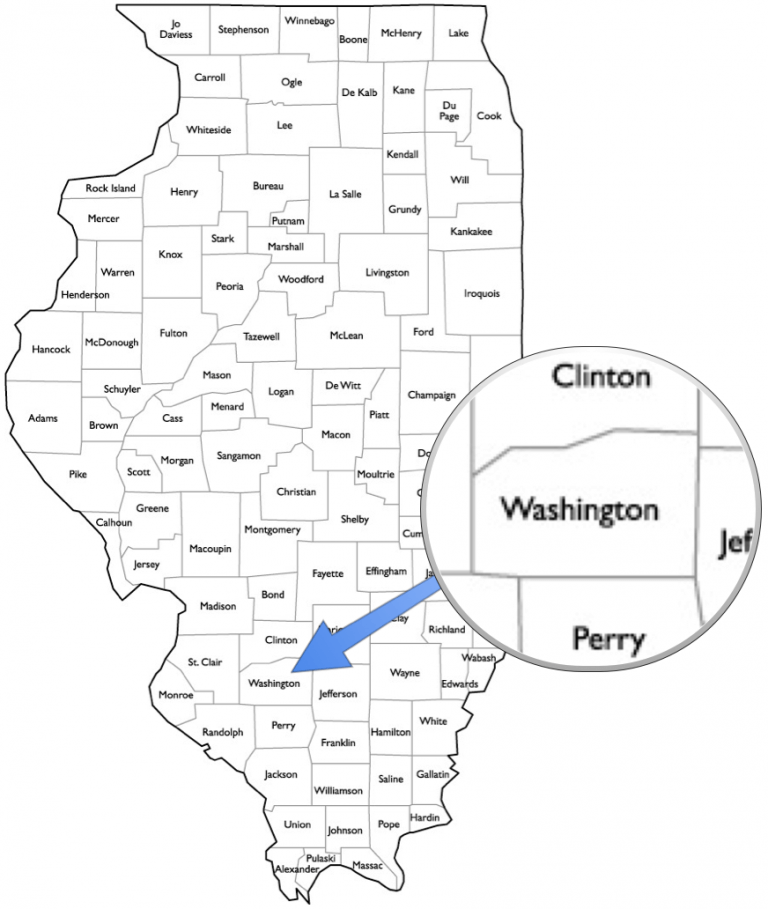 The county seat remained at Covington until 1831. For years all that remained of the old brick court building was the crumbling ruins. Today all that can be found is the red cast in the earth left from the disintegrating brickbats.

A new site for the county seat was demanded after Clinton County split away. A pole was stuck upon the Southwest Quarter, Section 17 of Nashville Township. The place was called Georgetown. No buildings were built, and when the court met, they found nothing to mark the spot, except the 40-foot pole, and the court adjourned to Covington. There was considerable debate among the East (Beaucoup) and West (Elkhorn) settlements. The people who favored the Nashville location were too poor to raise the money to buy the land from the government. They went to David Pulliam, a man who could raise a hundred dollars in cash whenever he desired. So persistent was the party who went to see him that Pulliam got so annoyed that he pulled off his old white hat and threw it to the ground and said “I would not give that old hat for all that town will ever make.” Two men, Robert Middleton and William G. Brown, of St. Clair were finally induced to purchase the land. 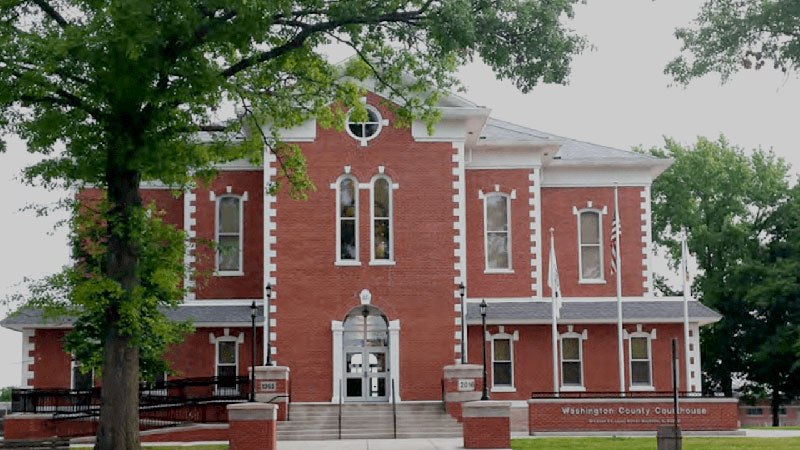 In March 1831, the town was laid out, platted and surveyed. David White, Joseph Whittenburg and Livesay Carter, the commissioners, declared this to be the permanent seat of justice of Washington County. All these men being natives of Tennessee, and having fond remembrances of that area, named the town “New Nashville.” The “New” was later dropped.

On June 25th, 1831, the county commissioners contracted with Thomas L. Moore for the building of a courthouse on the public square in Nashville. He erected a frame courthouse which continued in use until 1840.

On April 1, 1840, a new courthouse was contracted with the agreed price of $4,385. It was built on the site of the old one. The court room was on the ground floor and the offices on the second floor, later reversed. This building was destroyed by fire in 1883.

At a special meeting of the board of supervisors in October 1883, a contract was let to A. Hallenbeck for $23,999.00 for building yet another courthouse which was completed in 1884 and is the present day courthouse of Washington County.

In 1965, additional space was added to the front of the building. The symmetrical design of the exterior follows that of the existing building. A sand finished face brick was selected to match the color of the original bricks, which were made in the Nashville area eighty years ago; the cornerstone and foundation walls are of matching Indiana limestone. Windows have a matching brick and stone key to further blend the design of the two sections. The low roof is of the mansard type, again carrying out the design of the original building. The new walls and lawn are laid in symmetrical pattern to match the period of this architecture.